From Wikipedia:  Genealogy, also known as family history, is the study of families and the tracing of their lineages and history.  Genealogists use oral interviews, historical records, genetic analysis, and other records to obtain information about a family and to demonstrate kinship and pedigrees of its members. The results are often displayed in charts or written as narratives.  The pursuit of family history and origins tends to be shaped by several motives, including the desire to carve out a place for one’s family in the larger historical picture, a sense of responsibility to preserve the past for future generations, and a sense of self-satisfaction in accurate storytelling.

This week another chapter of our family story closed with the passing of David Alfonso Montoya who died in Salt Lake City on the night of March 5th.  David was my uncle and my God Father. 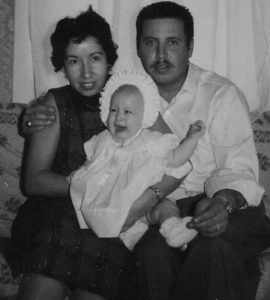 David and Adella Montoya with Judy Montoya; Dec of 1960

When David was two years old, the 1930 census was taken.  I found David living in Alcalde, Rio Arriba County, New Mexico.  He was living with his father Celestino Montoya, age 24 and his mother Manuelita, age 24.  Also in the home was his infant brother Pedro.  Father Celestino owned his own home which was valued at $300.  The residence was listed as a farm – and the family did not own a radio (that was one of the odd questions asked on the 1930 census).  Father Celestino was performing “odd jobs.”  The family is living next door to Manuelita’s father, Antonio Jose Lujan.  Also nearby is Celestino’s sister, Ramona Montoya Gallegos.

Sadly, David’s mother, Manuelita, died very young at the age of 27 on 13 Aug. 1931, and according to the 1940 census, David is living with his Montoya grandparents.  He is indexed as being 12 years old born in 1928.  He is attending elementary school and he is in the 6th grade.  He lives in Velarde, Rio Arriba County, New Mexico with his grandfather, Maximiano Montoya, age 69 and grandmother Juanita, age 56.  Also in the home is his younger brother, Pedro, age 10 who is attending school and is in the 1st grade.  Grandfather Max indicates that he owns his own home which has a value of $150.  Uncle Jose Ilario Montoya, age 24 lives next door with his family.  Sometime after the death of his mother, David’s father Celestino left for Bingham Canyon to work the ore mines.  This is where he met his second wife Pearl and where he can be found with her (along with four of their children) in the 1940 census.  It is my understanding that David was very close to, and may have spent some time living with, Manuelita’s brother Tomas Lujan (1908-1995).

On July 13, 1945 in Salt Lake City, one day before his 17th birthday, David enlisted into the United States Navy.  The record confirms many things that we already know about David – his date/location of birth; name of his father and grandfather; and it also confirms that his mother is deceased.  Further his World War II draft registration card indicates that he was living at 809 Broad Street in Kannapolis, Cabarrus, North Carolina at the time.  He indicated that he was 19 years old and again confirms his date/location of birth. His grandmother Juanita Montoya was listed as his next of kin.  He appears on several Navy muster rolls as being assigned to the USS Wisconsin BB64 (Feb; Apr; and June of 1946).

After his discharge from the Navy, it is assumed that he headed to Ogden, Utah where he met and married Maria Adela (Della) Guadalupe Garcia (1933-2009) on 9 Apr 1951.

At some point after their marriage, Dave and Della moved to Salt Lake City where they raised a large family.

Services/Mass for David will be held on Saturday, March 11th at St. Patrick’s Church in Salt Lake City.  Neil O’Donnell  & Sons of Salt Lake City will be handling the arrangements.  Rest in peace, Dave, you will be missed.

Life is eternal, and love is immortal, and death is only a horizon; and a horizon is nothing save the limit of our sight. Rossiter Worthington Raymond